The United Lutheran Church in South Africa (ULCSA) was founded in 1997 with one congregation in Randfontein, a suburb of Johannesburg. By the following year, the number of congregations had grown to three. Today the ULCSA is comprised of 26 congregations spread over the Guateng and Northwest provinces. Most of these congregations are small, with up to 30 active members each. These congregations are served by 11 ordained pastors along with 4 pastor candidates, 7 evangelists (trainees in church service), deacons and deaconesses, and Sunday school teachers.
Much work is still needed in South Africa. Many congregations do not have pastors. Sunday schools are struggling to find qualified teachers and materials. Outreach into the communities is vital, especially outreach to the youth. Many of the youth in South Africa are dragged down by addictions, lack or work, and poor education. God is working, however, and we humbly ask for your prayers for the United Lutheran Church of South Africa!
Do you feel called to go to South Africa? If so, we'd love to have you join us. There is a trip going to South Africa in October or November of 2011. We will be holding pastors' training as well as working extensively with the Sunday School teachers, Sunday School children, youth, and public schools. We are praying for both singles and couples to come along. For more information about South Africa, check out the South Africa tab or the informational video both found on our website. To apply for the trip or for more information about the trip, contact the Foreign Mission Administrator, John Ruotsala at foreignmission@comcast.net.
Posted by Foreign Mission Administrator John Ruotsala at 1:23 PM No comments: 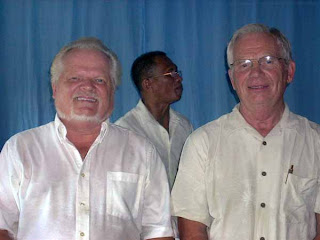 I really feel blessed! God allowed me to visit the Philippines twice this year and both times it was a wonderful experience. The main difference this time was that I did not go with the FM team that I went with in January, but with my brother, Pastor Raymond. This was the first mission trip we had ever gone on together - Together we were able to go to new areas that the Foreign Mission has not been able to go into before which proved to be very rewarding. And together we were able to go down memory lane and explore many of the areas of our lives, our precious family heritage and our spiritual background that we have in common. See why I call it a real blessing!


My brother Raymond and I were welcomed first by Pastor Benjamin Alud (center back) in General Santos City in the very southern part of the big island of Mindanao. We were asked to begin the first seminars immediately upon arrival the very first day. Originally two day pastors' and church workers seminars had been planned in both Gereral Santos City and Sarangani Province on consecutive days, but when we got there we found that both seminars had been mistakenly scheduled for the SAME TWO DAYS. So Raymond and I had to split up and take different days at different places. 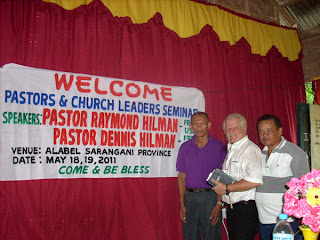 The first day I went out to Sarangani Province and Raymond took the seminar in General Santos City. The next day we switched. In this picture Pastor Benjamin Alud, who arranged our time in southern Mindanao is on the left and the host pastor of the church I spoke at is on the right. The seminars turned out to be well attended. Several tribal pastors from the hill country in Sarangani Province attended this seminar here in Alabel.
On the second evening a very spirited and youthful crusade was held in an open sports hall in the city. Not unusually the PA and sound system acted up most of the first part of the evening. This is a frequent occurrence in some of the mission countries we visit - either the lights go out or the microphone goes off or both. Anyway, as I got up to speak my translator and I gripped our microphones and said a fervent prayer because they were sputtering and spattering. The moment we prayed the microphones both began to work flawlessly - and did so for the remainder of the crusade evening where many people came forward in penitence for prayer and blessing at the close of the service. It was a thrill to see all the young people who came forward. Unfortunately the pictures that Raymond and I took that night all turned out too dark. A real pity since it was a very inspiring occasion. 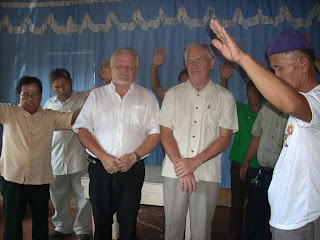 Brother Raymond and I then flew to Cagayan de Oro in the north of Mindano and held a one day seminar there - this time together. At the close of that seminar the pastors all gathered round and thanked God for our service in the Philippines and asked Him for continued blessings upon our lives, mission, and ministries. The head of the Overcomers Apostolic Lutheran Church of the Philippines, Pastor Bert Senonis, is on the left. 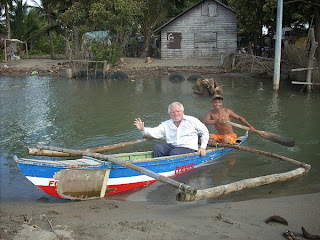 The following Sunday I preached at a village church on a low-lying peninsula by the sea near Cagayan de Oro. While the service got underway the tide came in and was lapping at the door of the church not long after we sang the last hymn. Nothing to do but wait an hour or so in the now isolated flooded village until the tide went down and I could depart - not on a motorbike as I had come, but on this colourful craft which took me across a river so we could get back to our car. 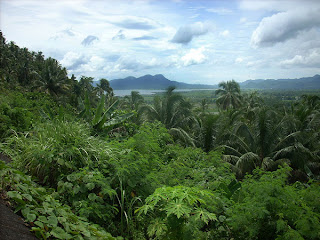 After brother Raymond returned to America I was invited up to the Kitcharao area....about a seven hour drive still farther up the northern tip of Mindanao. The landscape in this mountainous lake country was lush and breathtaking. 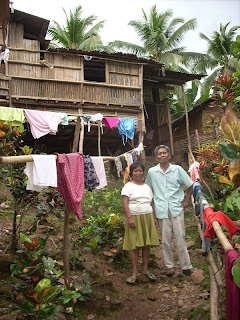 Up in the hills we were taken to the Tribal Church in Maraiging - here pictured with Pastor Sergeio Galdiano and his wife Ruth - where we had a short service. 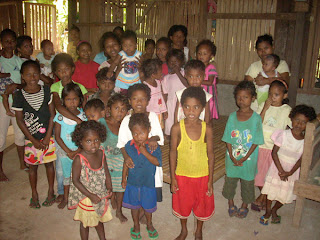 A lot of children came to church. Their fathers and some of their mothers were at work in the fields and forests since it was midday. 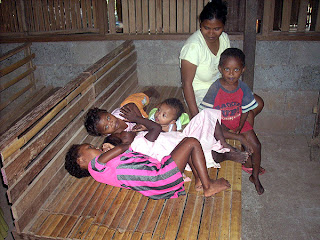 A special arrangement for the tiny tots which I thought was novel - an enlarged bench so that they could sleep during the service and their parents could follow along. 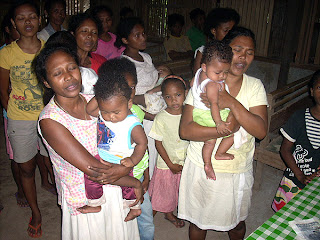 "Suffer little children to come unto me and forbid them not!" At the end of the service the mothers crowded forward with their little ones for prayer and blessing. Note the very dark and sometimes almost negroid features of these tribal people - also the curly hair which is otherwise unusual in the Philippines. 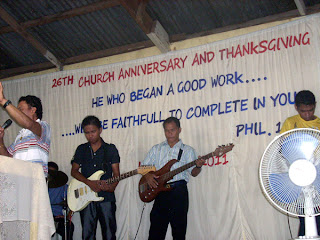 The special event to which we were invited to in the Kitcharao area was the annual Thanksgiving Day celebration (not the fourth Thursday in November that we are accustomed to) and the 26th Anniversary of the church that Pastor Senonis heads. Here the musical comp group bows their heads for a time of prayer. 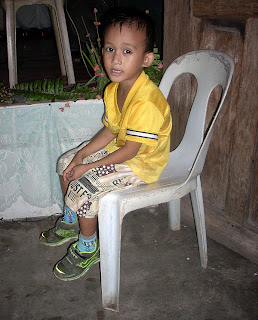 And I just had to have you say hi to my little hero, Junel Mosquito, who you met in January.....you know the little boy wonder - drummer and singer - The grandson of the host pastor of the Thanksgiving Day services, Pastor Mosquito. I think he's about six but looks even younger - and certainly not too much bigger than a mosquito. By the way I learned this time that they don't call him by his real name, but have given him the nickname of Do-Dong. Could that be what his drums sound like?? And it's all to the glory of God! 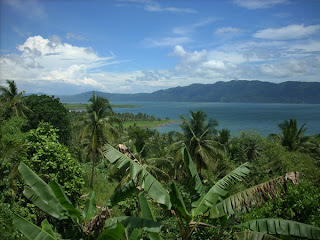 Rounding the curves on the picturesque highway back from Kitdharao you get a great view of Lake Mainit one of the biggest lakes in the Philippines. How could I help but love such a country and its people who have given a whole new meaning to the word "gracious"!!

I returned to Finland on June 2 and have had a very special time here so far. It is so nice to get to see my family on a daily basis and to sleep in my own "pad". But I am not complaining. This spring has been one of the happiest and most rewarding springs of my life and by this I mean that I am so happy to have been able to do the Lord's work on such a scale. With this comes the sincere thankfulness that He has provided the health and energy, the rest and relaxation and the inspiration to carry it out. Again, all glory to God!!.

I now have about three weeks to kick back and relax here in Finland before I attend the Centennial Hilman Family Reunion in Sylvan Lake (Canada) the first weekend in July and then our national church convention in Michigan the second weekend of July.

Have a blessed summer.

In God's love and peace,