Please click on the link below for the April News Report Picture is in Ghana April 2011
Posted by Foreign Mission Administrator John Ruotsala at 4:18 PM No comments:

Your Foreign Mission is currently working to expand the scope of our mission work.

As always, our focus will remain on the preaching of the gospel which has been done through services and  pastor’s training.

Now, however, we would like to invite you into the mission with your specific calling and talents. Do you have skills with children or youth? Are you experienced in leading women’s Bible studies? Do you love working with new believers or speaking with those who don’t yet know Christ? Is God calling you to take a short-term mission trip? If so, please contact us! We’d love to hear from you and we’d love to send you more information and resources.


There are lots of upcoming trips. Please pray for (and prayerfully consider joining) the trips to Russia this summer, South Africa this fall, India early next year, and Philippines next May. Anyone who is interested in joining one of the trips, please contact the Foreign Mission today at foreignmission@comcast.net

We look forward to traveling with you!

I have just returned from a very inspirational trip to Togo. Imagine that in such a poor country God provided me with such a great reception this time. Pastor Nestor Devigan, President of the Apostolic Lutheran Church of Togo and the vice president, Pastor Victor Abalovi organized our stay. They changed many things this year because of some of the dismal experiences of the past. Instead of a raunchy road of mud and potholes there was a nice paved road all the way to Notse, the town they chose for the venue of the seminars this time. In the past two years the seminars have been held in remote villages. Notse is only a two hour comfortable drive north of the capital of Lomé. Instead of a single bed in a single room in a simple hut there was a nice hotel with air conditioning and would you believe even a swimming pool. Instead of some of that questionable Togo village food (from which as you know I contracted a life threatening food poisoning last year) there was a restaurant which even had spaghetti bolognese and pepper steaks!!

But even better than this the seminars were very much better organized this year. Over 50 local pastors and church workers attended the three-day seminar "religiously"! They were really there from start to finish. And how they participated!


The seminar days culminated in a session that I call "Lasting Change". Those of you who know me well or who have followed my articles from various countries are familiar with this concept. But in Notse, Togo it really came to life. We first studied the text on the infirm man at the Bethesda Pool who made his problems known to Jesus and was instantly healed - how Jesus wants us to confess what burdens us before Him and others. After that each person took a pen and paper and wrote down all - or at least the most significant - of the sins, guilt, fears, doubts and other problems that make their life difficult. They were assured that no one else would ever see this list but that it was to be openness to God. After that we formed groups of six persons each and the instruction was that each person would take one thing on their list and confess it to the group, after which the whole group would then lay their hands upon that person and declare, in the power of Jesus name and blood, the cleansing from that sin or problem and otherwise pray that he/she would find true release in all areas where they were being before God..


It would be hard to describe what then happened. Every group took the instructions and admonitions completely seriously and soon the whole church was filled with people praying over group members and pronouncing the absolution in the powerful name of Jesus and in His atoning blood very audibly. It seemed as if the whole flimsy thatched palm leaf church would just get blown away. When the prayers finally died down and each and every person had been prayed for, of course including we the leaders, it was time to turn over the "problem papers" to the Lord and Him alone. We did this by throwing them all into a big metal basin. This we took outside while the whole assembly followed singing a beautiful and powerful song of praise - then we gathered in a circle, prayed and sang some more. 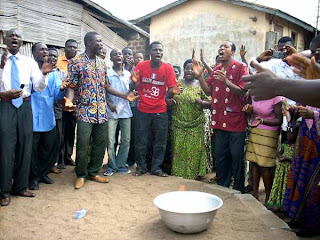 While the papers and the problems were being incinerated, songs were sung and prayers were prayed. This, I pointed out, is like how our sins and burdens are consumed by the fire of the Holy Spirit, covered in the blood of Jesus and drowned in the sea of grace when they are given to Him in confession and contrition. 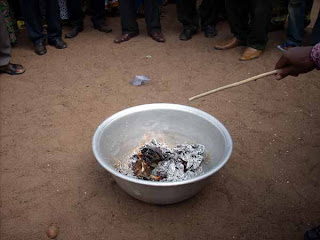 The burning basin. There is something very concrete in watching your worst fears, sins and problems consumed in the fire of God's love and grace. Of course this particular fire was only symbolic as I pointed out several times but it does represent what really happens when we confess and give all of those things to Jesus. 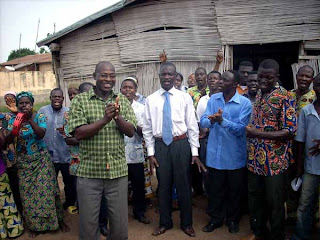 Gathered round with Pastor Frank Famiyeh from Ghana (in the green shirt) who accompanied me to Togo and assisted with the seminars. 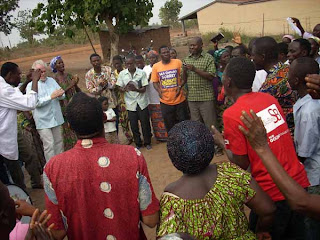 Another view of the group circle. It was a wonderfully animated one - both very serious and very joyful. 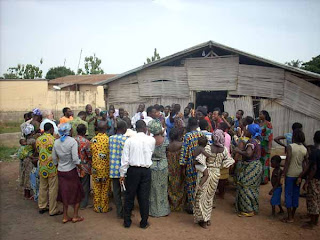 Here you can see the whole group outside the church around the burning basin. The church is not the sturdiest structure in the world but serves the purpose. By God's grace they have begun to build a more permanent church building right next door but are hampered by lack of funds. 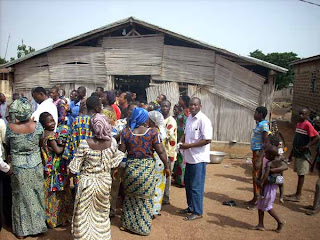 Another shot of part of the group with Togo church president Pastor Nestor Devigan in the blue jeans. 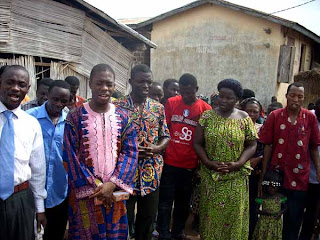 An intensive final prayer is said - of real thanksgiving and joyous release and freedom.


But I guess it was the Sunday service with the local congregation that really lifted me the most. The church was packed with gobs of children, wonderfully dressed women and even a whole lot of young men and men!! After the children's choir sang, then the women's choir moved rhythmically forward and sang two numbers. But it was the youth choir under the direction of a talented choir leader which did several songs with moving harmonies, that maybe made the greatest impression. But wait, I haven't mentioned the traditional drums and brass band!! Would you believe when I was introduced not one but four trumpets played a fanfare. I thought of how the "trump shall sound" on that great and final Day. But I must admit that never in all of my 65 years have I been introduced by four trumpets.

And as those trumpets blew the fanfare they also introduced the fact that I was to deliver the sermon. I chose the text about the man with the palsy who was lowered down from the roof into the presence of Jesus The congregation was very responsive but when I got to the part where Jesus surprised them all by saying "Your sins are forgiven you!" that message really went home with them. God is so wonderful and so powerful and you can see so clearly how His truths resonate in the hearts of true believers!!

Actually not quite so splendid was our first night at the hotel in Lome. While we were in the restaurant having supper, Frank's briefcase was taken from his room (he had forgotten to lock the door!) with his passport, a telephone and the money that we had just changed for our stay there - about $350. The next morning the case was discovered in another part of the hotel with the telephone and money gone but the passport still there, for which we were really thankful. The people at the hotel felt very bad about this and gave us that first night free of charge. Actually it was not free at all since it actually cost us far more than I would ever like to pay for a hotel room - but what could we do? The management overemphasized for us how careful we should be with valuables - and then my Visa card came in handy. 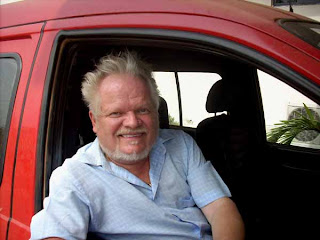 Blowin' in the wind. About five hours after leaving Lome, the capital city of Togo, we arrived back at my "headquarters" in Accra, Ghana. Five hours of hot breezes provided the "air conditioning" along with a lot of intense sunshine. When we stopped at one police checkpoint and the usual flock of vendors surrounded our car to ply their wares I had to tell them that there was nothing I needed. "But I like your hair!!" quipped one young female vendor happily. I looked in the mirror and realized it was all windblown and standing on end. No wonder she "liked it!"

Remember: To go to Togo was a great idea this year..

In God's love and peace,